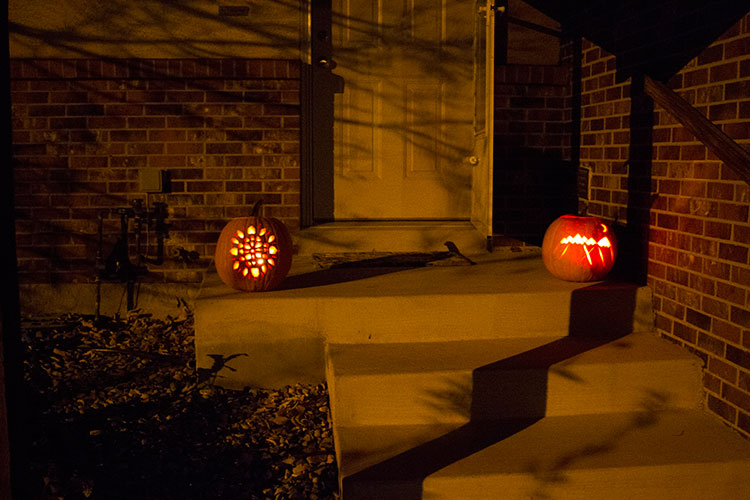 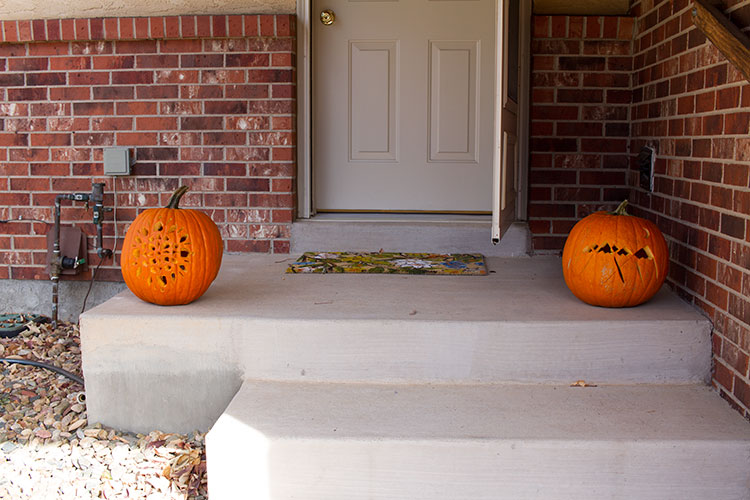 Thomas and I have been together for eight years and we’ve never carved pumpkins before, until now! We’ve bought pumpkins and one year we even grew a bunch from seed in our garden in Utah but I guess we just never got around to carving them. Since we are now parents I really want to start embracing the seasons and holidays by doing fun holiday stuff like carving pumpkins in Autumn. Carving pumpkins definitely brought back childhood memories as this was something we always did growing up.

I’m not into the dark decorations of Halloween expressed through ghosts, devils, blood, skulls, etc. Day of the Dead on the other hand does use skulls but it is a celebration of remembrance in honor of a person’s life that has passed away. Rather I enjoy the celebration of a season, the harvest, pumpkins, falling leaves, pumpkin pie, and all the positive and cheerful aspects of the season like warm teas. My mom always had decorations up for all of the seasons and I want to make it a point to be festive and do the same for Mila and our future children, you just won’t find skulls or dark imagery on our front porch ever. 🙂

Next year I want to go to a pumpkin patch and pick out pumpkins as a family but this year we just picked up two large pumpkins from Costco for $5 each. Mila is 9 months old and wasn’t able to carve them with us but she watched us in her play yard. It was really fun to get creative and carve with the knives! This is definitely something we will be doing every Autumn as a family from here on out!

As a new parent I have to say that play yards are awesome! We got a play yard for Mila when she was around four months when we were packing and needed a safe spot for her to be while we were moving. She is fine playing with toys in her play yard, but now that she is older and mobile she doesn’t want to be in it for very long, which is understandable. Fortunately she was able to stay entertained while we carved pumpkins.

Thomas cut the top of both pumpkins and we both scooped out the seeds with spoons and our hands. I always remembered this part of feeling like my hands got all wet and cold from scooping out the inside of the pumpkin and this was indeed true. My hands were freezing! haha. We separated the seeds into a separate bowl so we could roast those later. 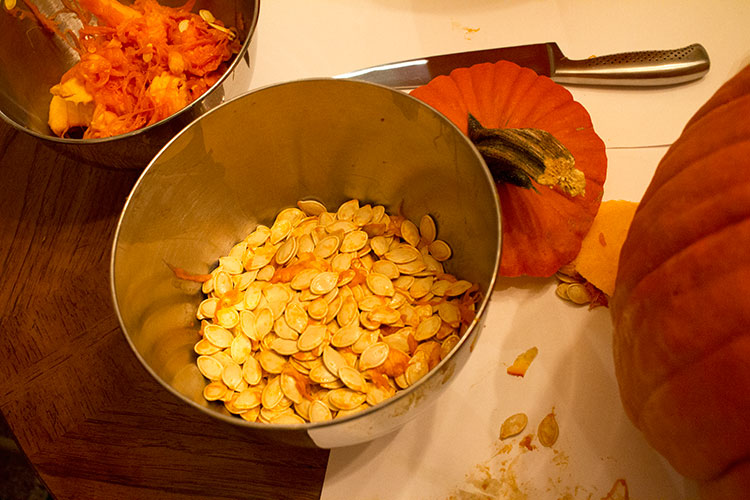 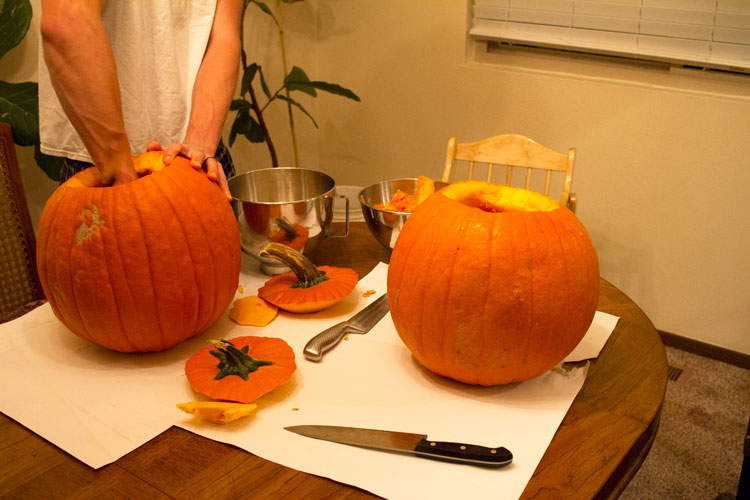 Both Thomas and I went freestyle in our designs. We didn’t plan anything out. Initially I wanted to write Namaste on mine (the divine in me appreciates the divine in you) but maybe I’ll do that next year. I knew I also wanted to make a mandala so I went that route. Mandalas are sacred circles that represent wholeness. I love creating mandalas (I sell my Mandala artwork in my Society6 shop). Maybe it is because I am a Libra but a Mandala is completely balanced all the way around which is what Libra’s strive for. I traced the outline of a circle and gently put pressure on the knife to form a circle outline and I kept my design within that circle. 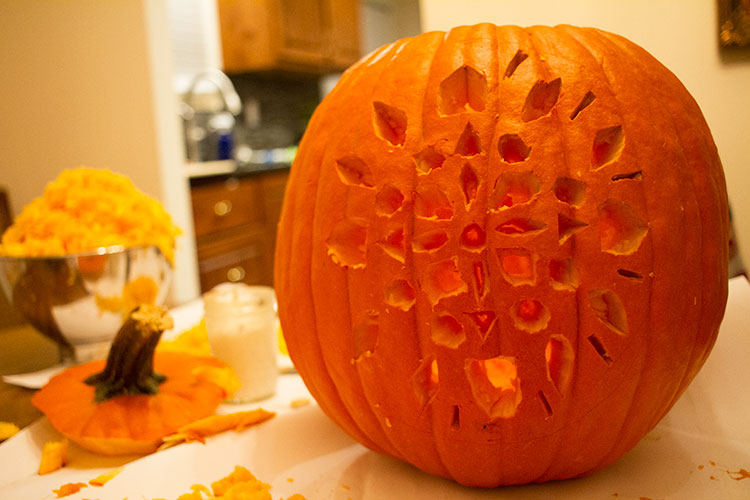 Thomas did an amazing job creating his mountains! I was really impressed with his! He even made stars in the sky and a crescent moon! How awesome! 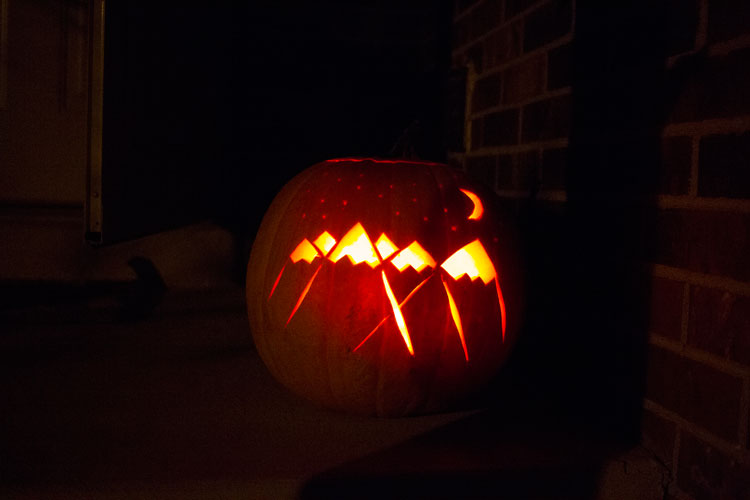 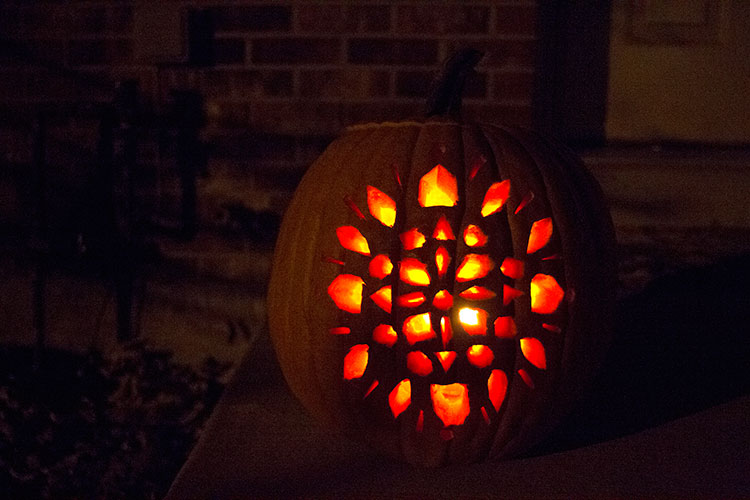 Pumpkin carving is something that is definitely going to be happening at our house year after year! Next year I’ll do more to decorate our front door step, but for now I’m pretty happy with how our carved pumpkins look!

How about you, did you carve pumpkins this year and if so what did you carve on your pumpkin? Do you have any other special Autumn traditions?